A tragic accident took place in Haria in Ilia on Monday afternoon, when a private plane that had taken off from Messolonghi airport with two passengers, crashed for still unknown reasons, in a residential area.

The single-engine aircraft was engulfed in flames, resulting the death of the two passangers. 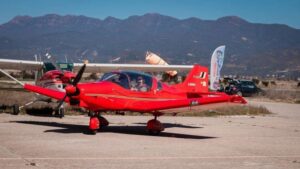 “Many times the pilot of the single-engine plane that crashed in our area today at noon flew over the community of Haria”, the representative of the community in the local council, Panagiotis Tsapardonis, stated.

Regarding the moment of the plane crash, Panagiotis Tsapardonis stated that “first we saw a smoke and then a fire, while arriving at the spot we saw the wreckage of the plane, which had fallen a short distance from the community houses”. “Then”, he adds, “we learned that the pilot of the plane was the teacher from our village and another person and unfortunately they were both found dead”.

Speaking about the pilot, Panagiotis Tsapardonis said that “he often flew over the community in which he grew up. In recent years he lived in Amaliada”.

His passenger was the 58-year-old Costas Kalogerogiannis, who was a resident of the city of Messolonghi and he had a great love for airplanes and even intended to buy his own soon.