Greek Phalanx vs. Roman Legion: A history of the most powerful military formations in the ancient world

The Greek Tactical Armored Vehicle OPLITIS at the DEFEA 2021 (photos)

The Turkish corvette Baykoz, which had departed from the Aksaz Turkish Navy Base opposite of Rhodes and was sailing west of Karpathos, fell yesterday afternoon in the well-prepared trap set by the Hellenic Navy.

The order of the Turkish ship was to harass the planned execution of a live fire exercise by the ships of the Hellenic Navy.

However, this exercise developed into a successful game for the Hellenic Navy, which, proceeding to an impressive diversion that sent the Turkish ship that was going to watch the exercise, in the open sea and at a distance of more than 100 nautical miles from the real place it was taking place. 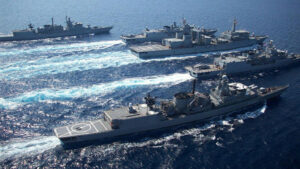 In particular, the Hellenic Navy had booked with the appropriate NAVTEX, two separate sea areas, one in the Carpathian Sea and one southwest of Crete for the conduct of the “Lonchi” (“Spear”) exercise, in an attempt to fool the Turkish ship that was expected to attempt to prevent the execution of the shots by sailing within the area that had been booked for this purpose.

In order to make Baykoz, which was lurking in the north of Crete, believe that the exercise would take place in the Carpathian Sea, the Hellenic Navy sent a missile boat to the area, which was supposed to meet there with the other ships of the Greek fleet that would participate in “Lonchi”.

The Turkish ships, falling into the trap, moved towards the area where the missile boat was going, as a result of which it moved away from the firing range west of Chania, thus leaving the Greek fleet undisturbed.

In total, three frigates, two submarines and three missile boats, were trained in all types of naval warfare with emphasis on the execution of firing drills against air and surface targets in the sea area southwest of Crete, in the presence of the Chief of the Hellenic Navy General Staff and the Fleet Commander, in an exercise that turned out to be more than successful for the Hellenic Navy.