Greek PM: Turkey has chosen the path of sanctions 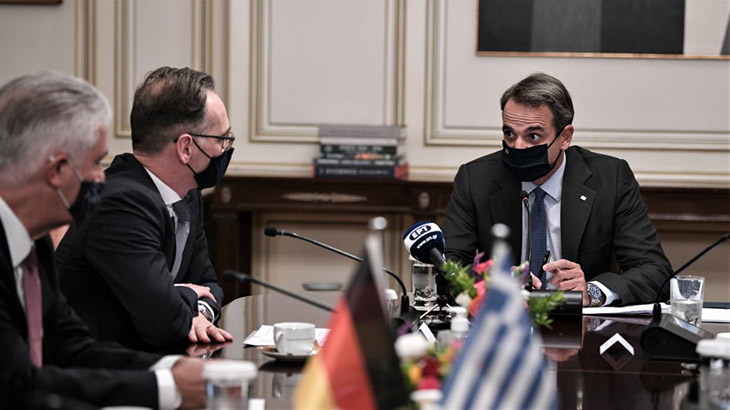 “At the recent summit we offered a very clear choice to Turkey, but unfortunately it seems that Ankara is choosing the path that leads to sanctions,” Prime Minister Kyriakos Mitsotakis said, welcoming German Foreign Minister Heiko Maas to Athens on Tuesday evening.

Welcoming Mr. Maas to Athens, the Prime Minister noted that he was arriving in Greece in ‘challenging times’ and that no one can be happy with the recent developments in the region.

Mitsotakis stressed that the conclusions of the recent European Council are clear, calling on all parties to refrain from provocations. But since then – as he added – we have seen the expedition of Oruc Reis to Kastellorizo ​​and the opening of Varosha coast in Cyprus.

“Obviously we will not talk under these circumstances. We offered Turkey a very clear choice at the recent Summit: A renewed partnership or consequences in the event that aggressive behaviour continues. And it seems that Turkey has chosen the second path”, the prime minister stressed.

The PM even made reference to paragraph 21 of the text of the conclusions of the recent Summit, according to which the EU will use all the means at its disposal.

The Prime Minister noted that Greece had agreed to start exploratory contacts from where they had stopped in 2016, with the sole issue of delimiting the maritime zones, but instead of a date for their resumption, the Oruc Reis return to the eastern Mediterranean.

On his part, the German Foreign Minister stressed that Turkey’s provocative stance is completely contrary to the spirit of what was agreed upon.

“That is why I have a lot of understanding of the fact that in Greece there is not just annoyance, but irritation. It is not the first time that the path that was set was interrupted through Turkish provocations”, stressed Heiko Maas.

He added that his decision not to visit Ankara, as originally planned, reflects in practice the solidarity and support that Greece has from the EU and Germany.

“It is now up to Turkey to create those conditions and the atmosphere so that in the end there is the possibility of conducting exploratory talks without further provocations,” the German Foreign Minister added.