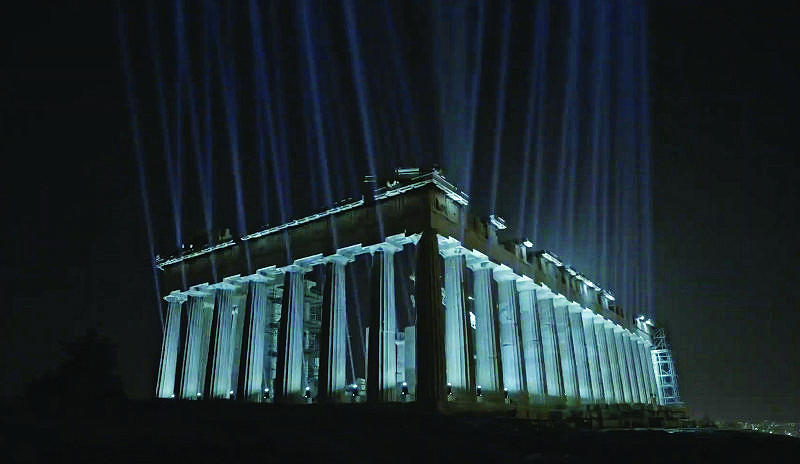 The new, spectacular image of the Acropolis will travel to the ends of the earth today as the important project of its upgraded lighting completed by the Ministry of Culture and Sports was inaugurated, with the sponsorship of the Onassis Foundation and the artistic supervision of the award-winning lighting designer Eleftheria Deko.
The official event of the new illumination of the timeless symbol of world culture and democracy, which was broadcast live via live streaming, took place in the presence of the President of the Republic Mrs. Katerina Sakellaropoulou, the Prime Minister Mr. Kyriakos Mitsotakis, the Minister of Culture. Lina Mendoni and the president of the Onassis Foundation – Mr. Antonis Papadimitriou.

“The ancient flame is transformed into a modern light course. The light of the 21st century embraces the Acropolis. It is a celebration beyond borders and languages. The values ​​that were born in this place are a universal property”, said the Prime Minister Kyriakos Mitsotakis in his greeting at the lighting ceremony of the Acropolis.

“The previous lighting was already 15 years old. Time had worn it down. Their technology was outdated.

The change under way today was a conscious political choice. To re-integrate the symbol of classical Greece into everyday life. The practical goal was twofold. On the one hand, to highlight the space with its volume and geometry.

On the other hand, the facilities should be modernized, gaining more durability and a smaller energy footprint.

And the Acropolis itself is at the same time a mine of memory, a trigger of creation and an eternal compass.

In an environment of absolute accessibility.It is indeed a heavy duty to invite Greek artists to illuminate the work of Greek ancestors that for centuries illuminates and will illuminate the whole of humanity. In the pandemic that besieges the world today, our whole refuge and weapon are the values ​​of solidarity and equality.

Three years ago, President Macron spoke of a new European sovereignty, and the intervening events confirmed its necessity. Problems can not be answered individually except with the cooperation of all the countries and peoples of our continent which is our common homeland. It is up to us to win the crucial bets of our times if we face them together.