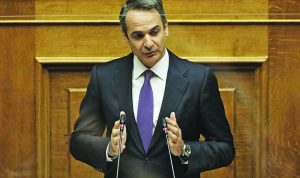 An online campaign to put pressure on Turkey and Recep Tayyip Erdogan in order not to turn Hagia Sophia into a mosque has been launched on the avaaz.org platform.

The text explains the situation as follows:

The temple of Hagia Sophia in Constantinople is a masterpiece of byzantine church building and pioneering architecture. It was inaugurated in 537 AD and presents a historical monument that belongs to all humanity.

This is why UNESCO, since 1985, has inscribed Hagia Sophia on the World Heritage List.

The change of the temple’s status, that would occur if it is turned to a muslim mosque, as per the Turkish President’s threats, shows disrespect towards history and religious freedom. It also violates the ratified by Turkey UNESCO Convention Concerning the Protection of the World Cultural and Natural Heritage of 1972.

We ask Turkey to respect the status of Hagia Sophia as a World Cultural Heritage monument.

We call on UNESCO to take necessary action to avert the change of Hagia Sophia’s status, ensuring that Turkey will honor its Convention signature, according to which changing the status of a World Cultural Heritage monument requires a decision by the organization’s Intergovernmental Committee.
No one has the right to revoke 1483 years of history.

The campaign is under way and a decision by the Turkish Supreme Court is expected by July 15 following an appeal by a Turkish union against the document which turned Hagia Sophia to a museum.

Turkey’s attempt to change the status of the Hagia Sophia has provoked strong reactions from the United States, Russia and France.