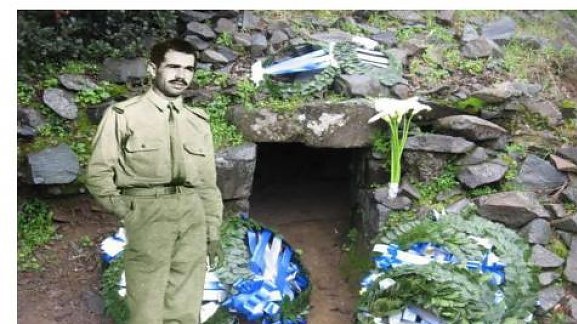 The Greek Hero, Grigoris Afxentiou, was killed on March 3rd 1957, exactly 63 years ago.
The following tribute is worth reading. It also has a video and links to other tribute videos.

“I will fight and fall like a Greek”
(Grigoris Afxentiou, in a letter to his wife, Vasiliki)

Grigoris Afxentiou is the pre-eminent hero of the EOKA struggle 1955-1959 to liberate Cyprus from British colonial rule and unite the island with Greece.

Afxentiou was born in the village of Lysi, Famagusta district, (now under Turkish occupation) on 22 February 1928 and killed in the Battle of Machairas on 3 March 1957.

After a four-year stint in Greece, initially as literature student at Athens University but unable to afford the fees then serving in the military as a lieutenant on the Greek-Bulgarian border, Afxentiou returned to Cyprus in 1952, where he worked with his father in the fields and then as a taxi driver.

When EOKA was formed in 1955, Afxentiou was one of the first to enlist and because of his military background, charisma and boldness, quickly gained the trust of EOKA’s leader, Giorgos Grivas, who made him his second in command.

Afxentiou led attacks on British installations on the island, such as the power company and the broadcasting corporation, and was responsible for training EOKA recruits in weapons’ use, bombmaking techniques and guerrilla warfare. The British put a bounty of £5,000 on his head.

All the while engaging the enemy, the Greek forces retreated to the summit of the mountain and, in heavy fog, managed to escape to the west, leaving the confused British, thinking they’d come across EOKA and not each other, to shell and fight among themselves. Grivas claimed that during the Battle of Spilia the British suffered 50 casualties; the British say they had three.

For the next year, Afxentiou, constantly on the move, often disguised, continued to direct and conduct operations from hideouts in the Troodos mountains, and at the beginning of 1957 found himself holed up near Machairas monastery, south of Nicosia.

On 3 March 1957, British troops from the Duke of Wellington’s Regiment, Royal Northumberland Fusiliers and the Grenadier Guards acting on a tip-off surrounded Afxentiou and his four comrades in their hideout, and called for the men to surrender. Afxentiou ordered his men to leave to fight another day but insisted he had to stay. ‘I will fight and die,’ he told them. ‘I have to die,’ he said and repeated this four times.

With Afxentiou alone now, the British stormed the hideout, but Afxentiou held them at bay. They lobbed hand grenades into the shelter, but the wounded Afxentiou wouldn’t give up and continued to fight. The British sent in one of Afxentiou’s comrades, Avgoustinos Efstathiou, to persuade Afxentiou to surrender, but Efstathiou decided to stay and fight with his leader.

Eventually, after resistance that lasted 10 hours and after all conventional methods had failed, the British poured petrol into the hideout to burn out the EOKA men. Afxentiou once again persuaded Efstathiou to leave but still wouldn’t surrender himself. A charge was attached and the hideout blown up in an explosion that reverberated throughout the mountains.

The intensity of the flames made it impossible for the British to approach the hideout and it wasn’t until the following morning that the British were able to get inside, where they found Afxentiou’s burnt body and next to it a sub-machine gun, revolvers, grenades and a copy of Kazantzakis’ Christ Recrucified, given to Afxentiou by the Abbot of Machairas.

* The video clip (above) is from a Cyprus TV documentary, the whole of which (70 minutes, in Greek) can be seen here. The clip shows newsreel footage from the Battle of Machairas, the capture of Avgoustinos Efstathiou and the death of Afxentiou. The excerpt with Michalis Triantafylides is particularly noteworthy and is an account of how Grigoris’ father, Pieris, was taken to see his son’s charred remains in the mortuary and came out with a broad smile on his face. Triantafylides says he couldn’t believe the old man’s reaction and thought that perhaps the remains weren’t Grigoris’ and he was still alive. Afterwards, in the car journey away from the mortuary, the old man broke down. Triantafylides asked him why, I thought from the way you were before that it wasn’t Grigoris they killed, that it was someone else. ‘No’, the old man said, ‘it was him; but I didn’t want the dogs to see me crying.’ (To see clip with English subtitles, go here).