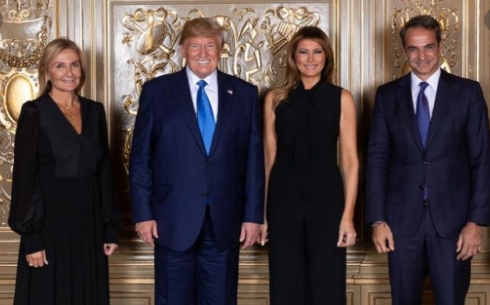 Greece’s prime minister says he will ask other NATO members at the alliance’s London summit to support Greece in the face of fellow member Turkey’s attempts to encroach on Greek sovereignty, notably last week’s agreement with Libya delimiting maritime borders in the Mediterranean.

Kyriakos Mitsotakis told the ruling conservative New Democracy party’s congress Sunday that the alliance cannot remain indifferent when one of its members blatantly violates international law and that a neutral approach is to the detriment of Greece, which has never sought to ratchet up tensions in the area.

Cyprus, Egypt and Greece have all condemned the Libyan-Turkish accord as contrary to international law. The foreign ministers of Egypt and Greece, Sameh Shoukry and Nikos Dendias, were discussing the issue Sunday in Cairo.

The Prime Minister’s schedule in London on Tuesday is as follows:

– At 12.00 pm, the Prime Minister will meet with international investors.

– At 19.15 Greek time Mr Mitsotakis, accompanied by his wife Mareva Grabowski – Mitsotakis, will attend a reception given by Queen Elizabeth to NATO leaders at Buckingham Palace.

It has also been officially confirmed by the White House that the Greek Prime Minister will visit Washington DC and will be accepted by US President Donald Trump on January 7th where they will discuss a number of issues such as ways to advance the two countries strategic interests, cooperation in the Balkans and the eastern Mediterranean as well as telecommunications security.

It is worth noting that the two men are expected to have a first contact on the sidelines of the NATO Summit in London probably on Wednesday, December 4th.