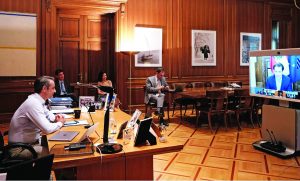 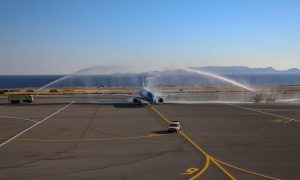 Trump to Erdogan: “We understand each other’s country”

In particular, the relations of the two NATO allies have never been so strained again. Under this regime, the Turkish president met with his American counterpart in the White House.

This is his second official visit to the US since 2017 and by far the most critical. The agenda was crucial. The issue of the purchase of the Russian S-400 missile system by Turkey was raised.

One of the key goals, in fact, as described by the Trump administration was to persuade Erdogan to abandon his plans to use the S-400s and to agree to a permanent truce in Syria. For his part, Erdogan tried to persuade Trump to continue the process of buying the F-35s, but also to stop the prosecution against the Turkish state-owned Halkbank executive.

At the same time, the reactions, though limited, have not disappeared. At the hotel where the Turkish president resides, a photo of himself with the message: “Erdogan is sleeping here, 864 babies are sleeping in his prisons” and the message:

“The biggest persecutor of journalists is sleeping here”.

US President Donald Trump welcomed his Turkish counterpart, Recep Tayyip Erdogan, to the White House, where he mentioned again their old “friendship”.
According to Trump, he and Erdogan are very good friends.

“We’ve been friends for a long time”, Trump said, with Erdogan at the Oval Office. “We understand each other’s country”.

In addition, the US president told reporters that the Syrian truce is being implemented very well, noting that the Kurds appear to be satisfied.

As he explained, the US has left troops in Syria to protect only oil fields.

The US president also said that Turkey has captured more than 100 Islamic State militants.

He underlined that the President of Turkey is a highly respected person in the region and that the US relations with Turkey are good.