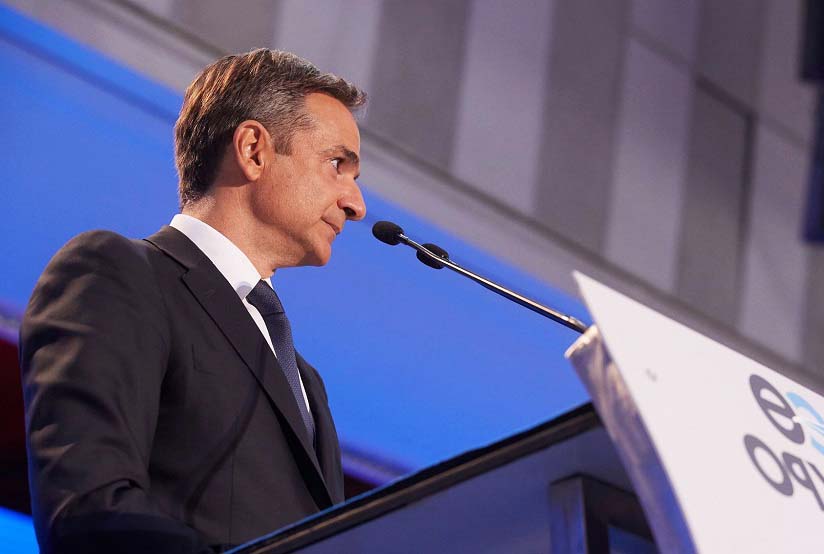 Greek PM Kyriakos Mitsotakis proposed from the podium the change of the Thessaloniki International Fair (TIF) into an annual meeting venue where all the plans and policy initiatives by governments over the course of the past year would be measured for their effectiveness.

The Greek PM announced a series of measures like the maintenance of the current low tax threshold, while he also said that a draft legislation on the vote of Greek expats would be submitted to Parliament in September.

He went on to say that each family would receive a 2,000-euro entitlement for each newly born, except high income families, while has announced the suspension of VAT for three years in the construction sector.

Greek PM Kyriakos Mitsotakis arrived at packed Vellidion Conference Centre accompanied by his wife, Mareva, where the attendees are waiting for him to deliver his speech.

Mr. Mitsotakis was greeted by his cabinet members seated in the front row.

The Prime Minister is expected to deliver a speech calling for a Pact of Creation, Action, Results and an agreement of Renaissance and Progress.

Mr Mitsotakis will reportedly refrain from making any promises for handouts, as he wants to avoid the “phoney” pledges made in previous years by the governments.

Instead, the prime minister wants to shift the focus of the TIF into a venue for a “year-long planning road map”, and a way for laying out medium-term directions, as well as a platform for “democratic accountability.”

The prime minister will place the economy and growth as the government’s top priorities this year, which are the “key” to every step of the country. The government will, again, pursue prudent fiscal policy with rigorously costed measures while focusing on investment to generate new wealth and stimulate employment.

He is expected to present all four areas of action aimed at economic growth: Tax policy, Investment, relations with the workforce and the Productive Digital State.