US warns Greece not to harbor Iranian tanker 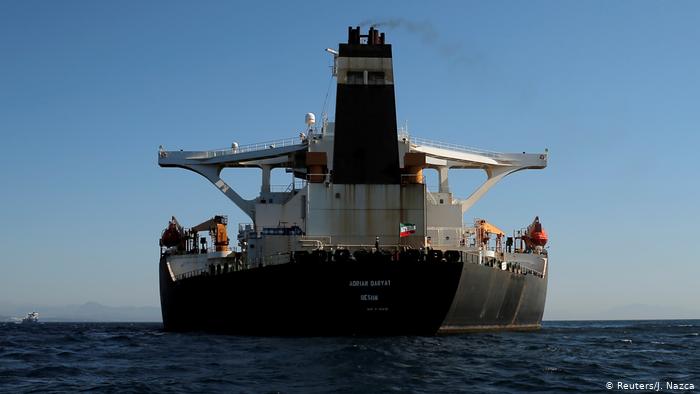 An Iranian oil tanker that was held for six weeks in Gibraltar is thought to be heading for Greece, but has not yet officially requested permission to dock, Greek Maritime Minister Ioannis Plakiotakis said on Tuesday.

“We are following its progress and are working with the Greek foreign minister,” Plakiotakis told Greek media.

The Adrian Darya 1, formerly named Grace 1, was seized by British Royal Marines on July 4 in the Mediterranean Sea off the coast of the British territory of Gibraltar over suspicions that it was carrying Iranian oil to Syria in violation of EU sanctions.

On Tuesday, the US warned Greece and other nations that it would view any assistance offered to the tanker as support for terrorism.

“We have conveyed our strong position to the Greek government on the matter, as well as all ports in the Mediterranean that should be forewarned about facilitating this vessel,” a US State Department official said.

On Tuesday, the tanker’s destination was reported by Marine Traffic, a maritime tracking website, to be the Greek port of Kalamata on the Peloponnese peninsula.

However, Plakiotakis told Greek broadcaster Skai that it was unclear whether Kalamata is actually the Adrian Darya’s destination, as the port was not built for supertankers.

According to Agence France-Presse, port authorities in Kalamata have not yet confirmed Marine Traffic’s information.

US and Iran trade jabs

The Iranian government has yet to disclose the tanker’s next destination, or where it will unload its estimated cargo of 2.1 million barrels of crude oil. Iran has denied the tanker was ever headed for Syria.

After the tanker left Gibraltar on Sunday evening, the US issued a warrant to seize the vessel, which was rejected by the British territory’s authorities. Gibraltar argued that US sanctions against Iran do not apply in the EU.

Iran gave a stark warning to the US on Monday over further attempts to seize the Iranian oil tanker that set sail on Sunday, after it spent six weeks detained in Gibraltar.

“Iran has given necessary warnings to American officials through its official channels … not to make such a mistake because it would have grave consequences,” Iran’s Foreign Ministry Spokesman Abbas Mousavi told reporters.