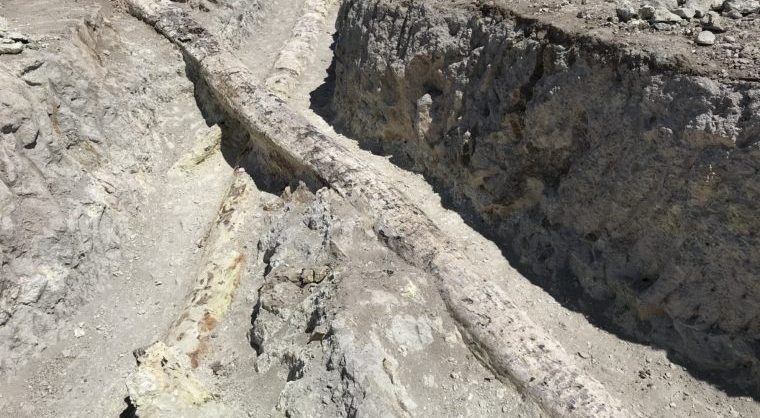 Two gigantic petrified tree trunks, lying one on top of one another, were discovered during salvage excavations conducted by the Petrified Forest Natural History Museum of Lesvos in cooperation with PPC Renewables.

The 21- and 23-metre-long trunks are of coniferous trees and the largest found anywhere in the area of Lesvos’ petrified forest.

According to museum director and University of Aegean professor Nikos Zouros, the trees “are probably ancestral forms of sequoia trees, and further research will confirm the details of their identity”.

Professor Zouros added that “the finds are spectacular, as they reveal the ferocity of the volcanic eruptions that took place around 20 million years ago in the region that is Lesvos today. The gigantic trees were uprooted and swept away by huge mud flows of volcanic materials, resulting in one ending up on top of the other where they were found.”

The salvage excavation was completed in order for PPC Renewables to replace nine outdated wind turbines with three new ones. Several petrified objects were found in the areas where the foundations were laid and “treated according to scientific methods, and transferred to the museum,” Zouros said.

Findings near one of the wind turbines will be left in place and eventually be shown to the public in the original place. Four much smaller tree trunks were also found, which will be preserved. All discoveries were made at a site adjacent to an existing protected area with petrified trunks.