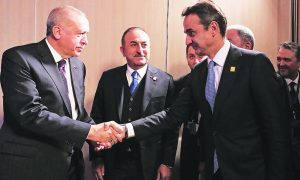 The discussion in the Greek parliament over revisions in the country’s constitution is underway.

The Greek Prime Minister, Alexis Tsipras proposed a specific term of office for MPs to avoid the cultivation of clientelism between the voters and politicians.

Mr Tsipras proposed an article to be included in the Constitution that would explicitly state the religious neutrality of the state, while he urged the parties’ leadership to refrain from making MPs follow a party line.

Your proposal is an anachronistic and ideologically-obsessed text. Observe the articles you do not want to change anything. Public administration, education, development, fiscal stability. You do not propose anything. You leave intact the structures that contributed to the crisis because you bet on them.

The ND proposal concerns 57 articles of the Constitution instead of 23 proposed by SYRIZA. A total of 13 articles are common despite the fact that the direction for the content is different with SYRIZA, the ND president”, Mitsotakis said.