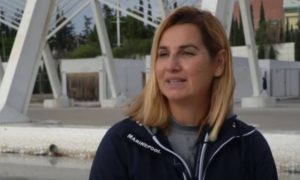 Bekatorou to testify on Wednesday to prosecutor

Winter Challenge Series, the top horseracing event of the winter that OPAP held in Markopoulo on Friday, December 15, has been met with great success.

Many horseracing fans, representatives of the business community, football and basketball veterans, artists and all members of horseracing community visited the facilities of Athens Ηorse Racing Track and watched an excellent – in terms of racing and organizing – horseracing event that included eight races, full of emotions and spectacular action, in total.

The three Winter Challenge races for the winter’s champions in two-year old, three-year old and four-year old horses that have been held for the first time in the same day have been the highlight of the event’s program.

Damian Cope, OPAP CEO and President of Hellas Horse Races SA, has stressed: “We are very happy for the second Winter Challenge Series that is held for the first time in the same day. We are also thrilled by the participation of people that are here today with us. I would like to thank our sponsors for their support”.

Odysseas Christoforou, 2nd Vice President of Hellas Horse Races SA has stated: “Today is an important day for Greek horseracing, since the winter champions emerged. We have continued the sponsorships’ initiative in yet one more top horseracing meeting. We are particularly satisfied from the fact that companies embrace horseracing and support our work”.

KOUTSOUNAKOS horse of Theodorakis Stables, with Edion Chella as jockey and Christos Kouvaras as trainer, has been the winner of two-year old thoroughbred horses.

ASTERION horse, owned by Apostolos Bayiastas – with Kostas Mastorakis as jockey and Eirini Kavroulakis as trainer – is the champion of three-year old horses.

The “battle” of four-year old horses was won by ATREIYIOU horse, owned by Kosmas Skerpetos and Ioannis Ntatsopoulos – with Ioannis Lazarides as jockey and Eirini Keratsa as trainer.

In this year’s Winter Challenge Series, OPAP has enhanced the sponsorships’ initiative, since all horse races were sponsored. In particular, the sponsors included: