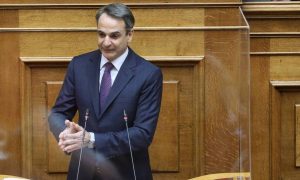 Germany Has 3 Coalition Options After The Election

Angela Merkel will almost certainly remain chancellor. The uncertainty is in how her center-right party will lead the country, and with whom.

With little more than a week to go until Germans cast their votes to elect members of their 19th Bundestag, or parliament, there is little doubt that Angela Merkel will secure a fourth consecutive term as chancellor. Where uncertainty remains, however, is how Merkel’s center-right party will lead the country, and with whom.
Germany has a decades-long history of coalition governance, with Merkel leading a “grand coalition” of the two largest parties during two of her three tenures to date. Currently, her Christian Democratic Union (CDU) hold an alliance with the Social Democratic Party (SPD).

The combination of parties set to form the next government will be determined after the Sept. 24 vote. As HuffPost Germany Editor-in-Chief Sebastian Christ writes below, all three conceivable outcomes contain negative consequences for Germany.

Negative consequences for the party system
The extreme right-wing Alternative for Germany (AfD) has steadily gained approval in recent weeks and is expected to enter the Bundestag for the first time.

The party benefited from the fact that there is no real race for the chancellor’s office. Many voters who want a change (but know very well that this change will not happen) find the radical protest attractive. All mainstream parties have already ruled out joining it in a coalition.

Even with the undoubtedly democratic forces in Germany, thinking in political alternatives is exhausted only by determining which political partner Merkel could form a coalition with over the next four years.
After Merkel’s first grand coalition, the SPD got its worst result in the history of the federal republic. Four years later, the liberal Free Democratic Party had to enter the extra-parliamentary opposition. Now, following Merkel’s second grand coalition, the SDP could add a new low to its record.

The problem, however, is not only a matter of party strategies. Any of the current possible alliances under the CDU chief could have negative consequences for the party system in Germany.

CDU-SPD: Opposition would be better for the Social Democrats
This is most obvious in the case of a possible new edition of a CDU-SPD coalition. If the SPD cannot leave power and wants to spend four more years as a junior partner in the government, it risks being pulverized beyond recognition.
It is already a major problem for the SPD that it was involved in the federal government in 15 of the last 19 years.

This became clear in the televised debate between SPD leader Martin Schulz and AngelaMerkel: On most subjects, the candidates were more or less in agreement. And who would expect anything else? If Schulz disagreed, he would have been attacking policies that his own party supported for four years.

Opposition would be the best thing that could happen to the SPD. But many experts were already convinced of this in 2013. And then came outspoken Foreign Minister Sigmar Gabriel.

In the meantime, one has to ask: What does Germany need the SPD for? It’s no longer a working-class party; it doesn’t want to be an academic party. The socialist Left Party can handle social good; the ecological, The Greens. However, if the SPD loses its last binding forces in a new grand coalition, the party system could splinter.

CDU-Green: A target for the right
For very different reasons, a CDU-Green coalition is likely to be difficult, but not because all parties involved don’t want it. Where there are creative possibilities to arrange, there is always a way among democrats.
In such an alliance, all those forces against which the elitist criticism of the extreme right-wing focused on for the last four years would come together. Without such a coalition, there would be the realistic possibility that the AfD would take care of itself in the Bundestag through its own incompetence.

CDU-Free Democrats: Four years of instability
A coalition of Christian Democrats and Free Democrats is also not desirable from the viewpoint of the political enterprise. The FDP has shown in the election campaign that it has hardly learned anything in the past four years.
The next four years would be a never-ending mud-slinging match, at the end of which the AfD could manage to remain visible or even make its mark with its own client base. In a worst-case scenario, we would experience something like the Weimarization of the Bundestag.

The compromise that the country needs
One alternative alliance creates hope. It is unlikely, because Merkel would need to bring people like Christian Lindner (FDP), Horst Seehofer (conservative) and Jürgen Trittin (Green) to one table. However, a CDU-FDP-Green partnership would be the best thing that could happen to Germany at the moment.
The Greens and the FDP could have a moderating influence on each other, and the SPD could do its best to regenerate itself in the opposition. The Social Democrats would finally have the chance to improve their image: by seeking out a confrontation with the AfD.

That would be the compromise that this country needs so urgently. It could also create change in four years.