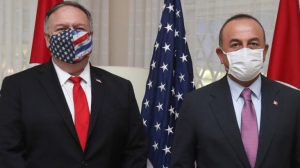 Turkey will not accept de facto situations in the Aegean, Turkish Foreign Minister Mevlut Cavusoglu said on Tuesday, adding that problems between Greece and Turkey should be resolved under international law.

Cavusoglu made the statement in response to a question posed during the Turkish National Assembly, saying there is a series of interrelated problems in the Aegean between Turkey and Greece.

“Among these problems there is the issue of sovereignty of certain islands and rocky islets and the fact that there are no sea borders defined by an international agreement that is in force between Turkey and Greece,” the Turkish foreign minister said.

“In this sense, the problem concerns the interpretation of the articles referring to the Lausanne and Paris Treaties,” the Turkish Foreign Minister said, adding that the issues in the Aegean are being discussed within the existing channels of communication between Turkey and Greece. “Our country wants to find a fair solution to all problems in the context of international law, taking into account its basic rights and interests,” he said.
According to Cavusoglu, since 1996 the Turkish Ministry of Foreign Affairs brings to light the issues regarding the Aegean Sea and its positions for solution via various announcements.

“In this context, we have announced that we will not accept de facto situations that Greece is attempting to create on a geographically disputed status, and that these initiatives can not have a legal effect. Along with these announcements, our views are expressed at every level to the Greek authorities, and protests are being sent by the Foreign Ministry in writing so that our positions are recorded,” Cavusoglu said.