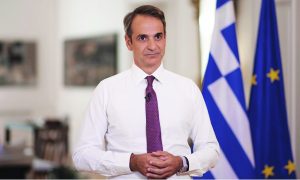 Raising the issue of WWII war reparations in statements after his meeting with German President Joachim Gauck in Berlin on Monday, President of the Hellenic Republic Prokopis Pavlopoulos insisted that some of Greece’s claims from that period continued to be legally active and pursuable through the courts.

While acknowledging the significance and bravery of the apology offered by Gauck to Greece during a recent visit for Nazi atrocities in WWII, Pavlopoulos said that for issues like the compensation or the repayment of a forced occupation loan continued to be active “in the framework of international legality, international law and order and European legal order.”

Greece considered Germany a friendly nation in this respect also, he added, and felt that Germany was, at this time, the force that could make the greatest contribution to Europe’s smooth course.

Repeating that Greece will meet its commitments on the economic front, and that this would emerge during the upcoming review, Pavlopoulos said the creditors would then have to make good on promises to give Greece debt relief, not in the form of a nominal haircut but as a debt restructuring in accordance with European Stability Mechanism (ESM) rules.

On the refugees issues, Pavlopoulos praised the stance adopted by German Chancellor Angela Merkel and said the problem had to be handled on the basis of European values and culture, adding that Greece will meet its obligations. He also made clear that Greece would make decisions on how to protect its borders, which were also the external borders of the EU, though the help of its EU partners was very important in this respect.

Turkey must also meet its obligations, he added, especially with regard to the illegal transit of economic migrants to Greece. “I say this extending a hand of friendship,” he added.